In the age of Spotify, the compilation CD might be as redundant as dial-up internet. But for me, they were an essential component of my teenage soundtrack. In this article, I’ll be revisiting an experience shared by so many music fans of my generation: listening to a collection of songs curated by someone else.

Always displayed prominently in HMV, there were lots of compilation albums. If you followed the charts, there were those interminable ‘Now’ albums. But if indie was more your thing, there were compilations like ‘Shine’, ‘The Bands’ or this one – ‘Reloaded’. Why did we buy them? For me, they were a way of discovering new bands without having to splash out on whole albums or buying endless singles.

There are some crackers, to be fair. To name a few: tracks by the Eels, Manic Street Preachers and Pulp served as my introduction to all these bands. They still sound great, if dated, today. Oasis make an inevitable appearance as well, of course, with a song per disc. One is the so-so Go Let It Out, but it’s more than compensated for by Half The World Away. In retrospect, it’s one of their best.

Steal My Sunshine by Len. It’s terrible and I hope I never have to hear it again.

I also still don’t like that smug prick Moby, or overly melodramatic Muse, although in both cases, it’s probably just me. 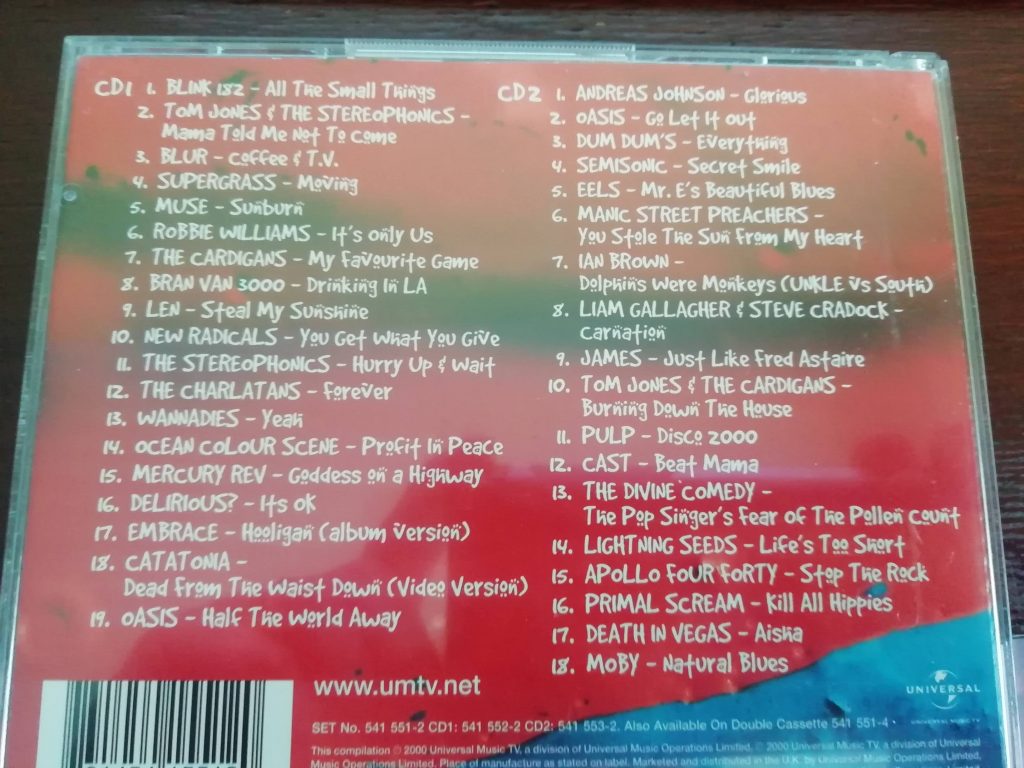 My Favourite Game by The Cardigans? Drinking in LA by Bran Van 3000? Of course you’re on here. Of course you are. You were on basically every compilation album around this time, weren’t you?

Compilations could be a good source of those one-off, non-album collaborations I wouldn’t otherwise have owned. The highlight here is Liam Gallaher and Steve Craddock (of Ocean Colour Scene) teaming up to cover a Paul Weller song, Carnation. Liam’s vocals might not be to everyone’s taste, but work well here. With its backwards guitars, it’s reminiscent of the Stone Roses. I don’t remember it, but I’m grateful to have rediscovered this one.

Meanwhile, what was it with Tom Jones around this time? There’s not one, but two songs involving collaborations with him – Burning Down The House (with the Cardigans) and Mama Told Me Not To Come (with the Stereophonics). Jones’ vocal range is objectively impressive, but his style wasn’t my cup of tea back then, and it still isn’t.

Off the beaten track

One or two more obscure songs found their way onto the album alongside the big hits, including some excellent bands I wouldn’t otherwise have heard of, such Catatonia and Mercury Rev.

At the time, I remember being gratified to see my then-favourite Delirious? making an appearance, represented here with It’s OK. A microcosm of their dual Christian/alternative identity, It’s OK was their best performing single in the UK, but also the one that pissed off American evangelicals with the lyric “she’s as pretty as hell” (seriously).

The ones I have changed my mind about

I’m not going to pretend I was anything other than parochial in my music tastes circa Y2K. Tucked away at towards the end of CD2, out-there tracks like Aisha by Death In Vegas (which features Iggy Pop’s vocals) or Kill All Hippies by Primal Scream would have alienated me with their weirdness back then. I don’t really remember them, so I must have just skipped past them. I wish I could say otherwise, because now they sound really good, and surprisingly contemporary compared to most of this album. 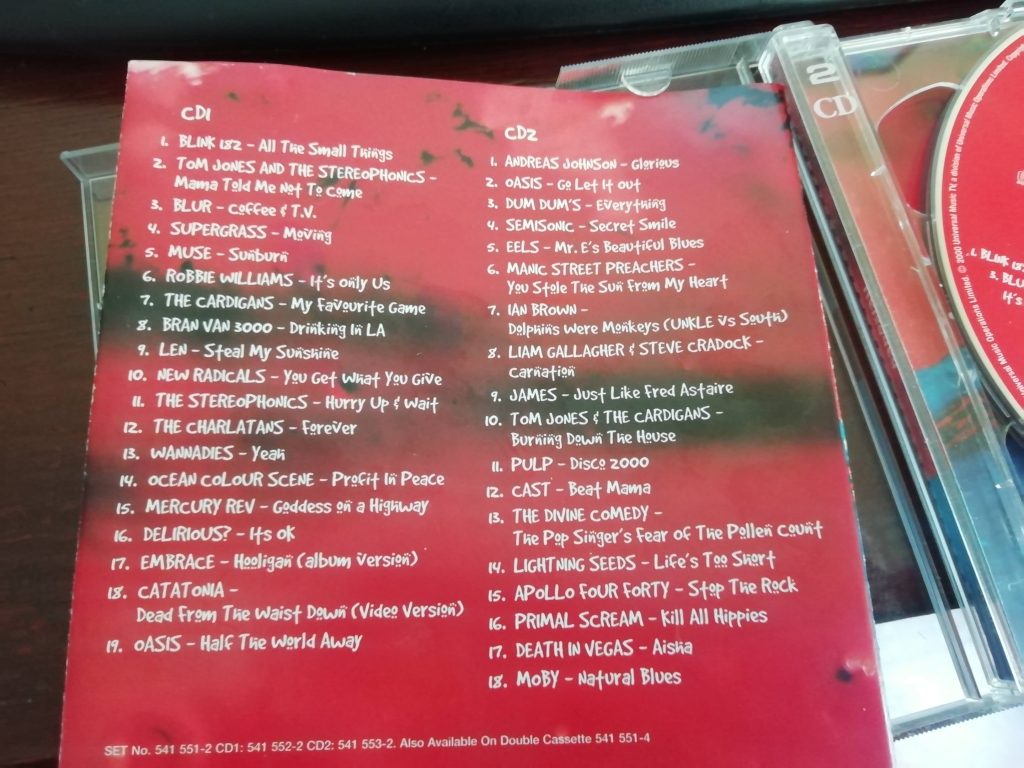 At the opposite end of the scale, as a 15 year old, I also disgustedly skipped past Robbie Williams’s It’s Only Us. A pop song by an ex-Take That member? What is this, a Now CD? I still don’t love it, but it’s certainly better than I remembered, and probably didn’t deserve my unquestioning teenage contempt. It’s also the only song I know of that mentions Stoke-On-Trent.

I didn’t like the chronically overplayed All The Small Things by Blink 182 at the time either. But, as MFV’s Alastair JR Ball pointed out whilst we were discussing this, how many people’s musical discoveries started with Blink 182, before moving on to Green Day, then The Clash? If so, fair play to them, I suppose.

Revisiting ‘Reloaded’ was certainly fun. It’s pretty varied, at least within the broad confines of the indie / guitar band genre. Unlike the current trend for being directed towards ever more similar music on platforms like Spotify (if you like X, then you’ll love Y), this is more akin to listening to the radio: you might not like all of it, but it’s enjoyable to let someone else shuffle the deck for a change.

Like all compilation albums, it serves as a snapshot of its era. Whilst listening to this, I’ve been reflecting on how much of an in-between time 2000 was musically. The cultural relevance of Britpop had fizzled out, but the new wave of stripped-back indie kicked off by The Strokes was still over the horizon. Big hitters like Oasis and Blur were still, to an extent, dominating the scene, but were drifting away from their roots.

Maybe Blur’s offering on this album is the most illuminating in this regard. Coffee and TV is a decent song, but it’s a far cry from the bouncy energy and hammed-up accents of the Parklife or Country House type songs of their heyday. Coffee and TV, Go Let It Out by Oasis, or Moving by Supergrass – they all sound like the hungover morning that followed the wild night out that was Britpop.

Which songs on ‘Reloaded’ do you love – or hate? What compilation albums did you own? Tell us below.