On the surface it looks like a person, but underneath it’s a robot. Then via a shocking twist, it is revealed that the robot is actually a person. It may physically be a machine, but inside its mind it has the same hopes, dreams and emotions as everyone else.

This idea has been explored many times in science fiction. Recently it has featured in TV shows such as Westworld and before that in Battlestar Galactica and British show Humans (based on the Swedish show Real Humans). The idea has been tackled in films such as AI: Artificial Intelligence, WALL-E and Ex Machina, and in novels by Isaac Asimov, Philip K. Dick and many others.

This doesn’t mean there aren’t original stories that explore this trope. Recently, I have been watching a Russian show called Better Than Us, about a dysfunctional family that adopts (or is adopted by) Arisa (Paulina Andreeva), a sophisticated android that might be hiding human emotions.

What makes this show different from all the above media that has tackled this idea before? Mainly that this show is Russian. That may sound glib, so let me be clear: this is a good TV show. It’s an interesting take on a concept that continues to fascinate audiences. It’s tense, has mystery and good characterisation. After I finished each episode, I wanted to watch the next one. However, what I found most interesting about the show is what it can tell us about Russia.

Writing from the perspective of being British (and I assuming that you are, most likely, from Western Europe or North America), Russia appears to be culturally very different to Britain. France, Germany and Belgium are different too, but our culture and values seem more intertwined (Brexit aside) than they are with Russia. The Russian government was our government’s enemy during the Cold War. Their alphabet and largest religion are different to most of Europe. This makes Russia seem like a very different place.

How we think about Russia is filtered through the few things we know about the country. It’s a place where a strong man rules unchallenged and is apparently popular. A place where people tolerate or acquiesce to opposition leaders being killed. A place that is culturally conservative and hostile to LGBTQ+ rights. Despite the end of the Cold War, we still see Russia as diametrically opposed to our values of democracy and personal freedom. We still see it as the East that is against the West. 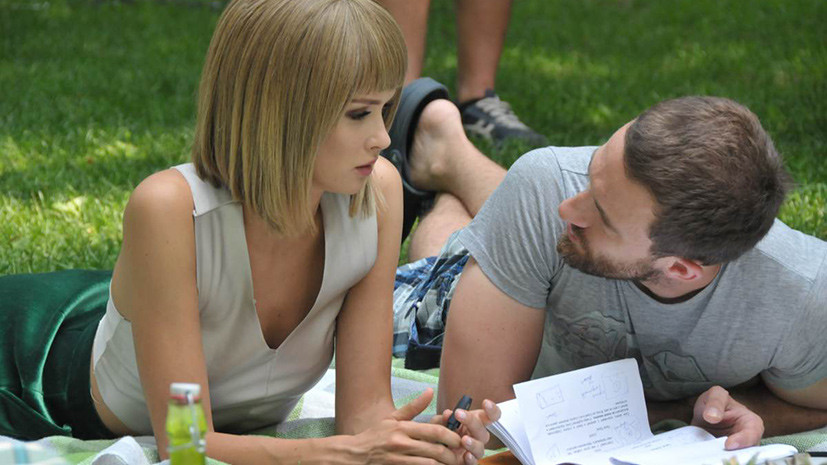 Almost none of this comes through in Better than Us. The sci-fi world of the show is similar to ours. A world of flats, jobs, schools, cops and corporations. The central conflict in Better Than Us is similar to many British or American TV shows.

The show follows a divorced father (Georgy Safronov played by Kirill Käro) who is worried about losing contact with his kids when his ex-wife (Olga played by Alla Safronova) plans to move to Australia. His teenage son (Egor played by Eldar Kalimulin) is experiencing things teenagers the world over experience: school, bullying, the flush of teenage desires. His daughter (Sonya played by Vitaliya Kornienko) is looking for domestic stability after her parents’ divorce.

There are cops investigating a murder, a tech entrepreneur trying to keep his firm’s lead position in the robot market, hints of a conspiracy and in the middle of it is Arisa: a domestic android who hides a secret and may be more human than we think. Crime. Intrigue. Family drama. So far, so familiar.

The point where the show came closest to trumpeting the conservative values that Russia (fairly or unfairly) is viewed by the West as having is Arisa’s desire to keep the very nuclear Safronov family together. Whilst watching the show I assumed that this was Russia’s cultural conservatism showing through, but then I remembered that many British or American shows are based around holding a family together. From Space Force to The Umbrella Academy, Western shows are frequently using threats to a family (nuclear or otherwise) as a source of tension.

The focus on the family as the core of the story is not the only similarity between Better Than Us and British or American science fiction. In almost all sci-fi shows about robots, from Russia to the US via the UK, the robots are almost always coded as female. Better Than Us, Ex Machina, Battlestar Galactica and many others – all contain robots that outwardly resemble women, are played by female actors and perform roles we associate with women: domestic work, childcare and being a love interest for a male protagonist.

In Better Than Us, Arisa is designed to preform domestic work. Since the beginning of the industrial revolution, families have brought tools into their homes (from mangles to microwaves) to reduce the amount of time taken up by doing what has traditionally been women’s work. These machines have reduced the time that women spend on domestic work and thus freed them up to pursue careers outside the home.

Economist Ha-Joon Chang argues in his books 23 Things They Don’t Tell You About Capitalism that the washing machine has a had a greater economic impact than the internet because of its ability to free women’s time from domestic work and thus allow them to seek employment outside the home.

Robots and the Second Shift

The idea of the humanoid, female coded robot that does domestic work is a logical extension of this. Despite the fact we now have machines that do what has been typically thought of as women’s’ work (washing machines, microwaves), women still do much more domestic work than men. This domestic labour is what Arlie Russell Hochschild called The Second Shift in her 1989 book that described the role of gender in domestic labour.

The idea behind a female coded robot is that she can do all the work of the second shift (child rearing, caring for the elderly) that is done disproportionately by women and can’t be done by our existing devices, without people ideas about gender having to change. Many countries with aging populations (such as Japan) are exploring the idea of domestic robots to perform tasks that in the past were done by women.

The fact that Arisa is coded as a woman and does domestic work goes hand in hand with the type of thriller Better Than Us is. The source of the tension is that Georgy has invited a sinister killing machine into the family home without realising it. The source of the drama is the dramatic irony that Georgy doesn’t know that is Arisa is dangerous, but his motivation is understandable. 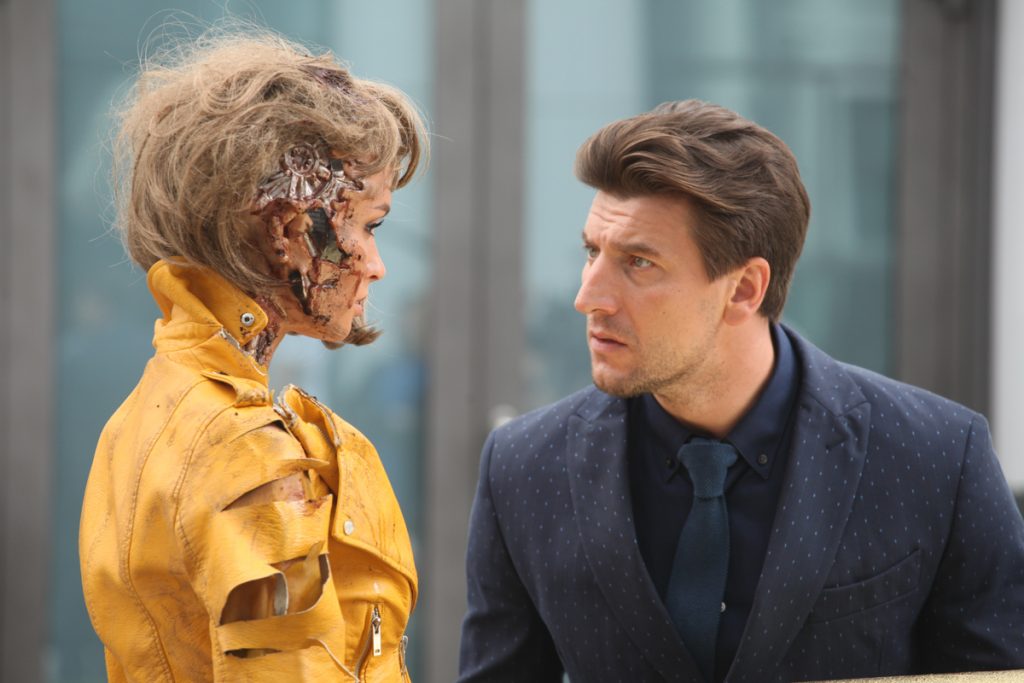 People it is okay to hate

Arisa being dangerous feeds into something else about androids that is crucial to Better Than Us: androids are people that it is okay to hate. A major plotline follows an anti-robot movement called the Liquidators who target robots for destruction. This mirrors the hated many people feel towards immigrants and minorities, in our so-called enlightened countries, but cannot openly express. Robots are people without feelings so they can be hated and killed.

The central point of this sub-genre of science fiction is to make us question who is human. Just because something has silicon in its brain, instead of soggy tissue, doesn’t mean it doesn’t have feelings or isn’t alive. It doesn’t mean robots don’t have hopes, dreams and fears like we do, and if robots have feelings like we do then why shouldn’t they have the same rights as we do?

Better Than Us is no different to the other works of this sub-genre as it leads us to question who is human and whether our definitions are too ridged. This is a liberal, humanist, more tolerant view of the world, where we extend the basic dignity and rights to a wider range of people. Better Than Us is the one of the more engaging, entertaining and thus more convincing versions of this story that I have seen for a while. It is certainly a lot better than tired Hollywood versions, from the awful Will Smith adaption of I, Robot to Steven Spielberg’s dull AI: Artificial Intelligence.

Seeing the world through someone else’s eyes

We might say it’s ironic that one of the best arguments for liberal humanism and tolerance has come from a country we view as illiberal and intolerant. Perhaps this is because TV allows us to see the world through the eyes of someone else and expands the range of people we feel sympathy for, which encourages the extension of rights and dignity to more people that is the core of the liberal, humanistic outlook.

By watching a Russian TV show, we see a glimpse into another culture, but we also see our society reflected back to us. Watching a foreign language show like Better Than Us can open your eyes to the values we all have in common and disprove some of the assumptions we make about other countries.

If you have enjoyed this article then you might enjoy this episode of our podcast where we discuss dark superhero show The Boys and German thriller Biohackers. You can listen below: