You are viewing all posts published for the month of March, 2018. If you still can't find what you are looking for, try searching using the form at the right upper corner of the page.

Marvel and Netflix have collaborated on 7 series now based on comic characters owned by Marvel. Some have been great. Others not so much. Below I list my least favourite to my favourite. 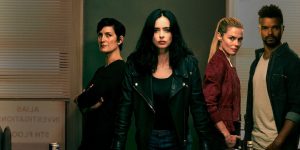 But first, Alastair has seen Hamilton and would like you to believe he’s mentioning it for reasons other than gloating. (As ever, Nick writes these notes.) The author himself, meanwhile, has been listening to the Buffering the Vampire Slayer podcast.

That done, they move on to Jessica Jones season 2 (10:31) with full spoilers after a quick early summary, throwing up a lot of questions about what the writers are trying to achieve, how much they succeed in any of it and whether it’s finally time for them to just take Nick’s oft-repeated suggestion and make the damn seasons shorter.

That done, Nick and Alastair investigate this week’s somewhat-related question: what makes a good difficult second album? (28:53) In which Nick refers to Heroes as a “recent” TV show and has now realised he is old. 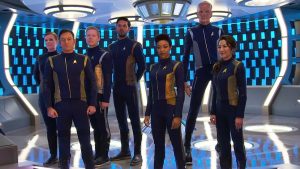 Now that the first season of Star Trek: Discovery is over, Nick and Alastair check back in to see how the much-hyped scifi comeback maintained its dead serious premium tones.

But first, Nick’s relived the raw excitement of his teenage years with The End of the F***ing World on Netflix, while Alastair continues ticking off the Oscar movies with I, Tonya. (Which, predictably, leads to a few minutes of more general Oscar post-game chat.)

After which, time to launch at warp speed into Star Trek: Discovery (9:55), with spoilers all the way to the very last shot of the finale. How have things changed since Nick and Alastair last flew with them in MFV #48?

And finally, in a very uncontroversial and unloaded discussion, inspired by one specific line from Discovery, they ask: How subtle should allusions to real life politics in sci-fi/fantasy be? (28:49)

It’s an Oscarbait special this week, as we dive into heavily award-nominated woman/fishman romance extravaganza The Shape of Water!

And then we go splashing in the waters of Sally Hawkins and the fish monster’s enchanting love with our review of The Shape of Water. (9:36)

And lastly, since this fantasy-horror-romance has been nominated for so many Oscars, does this mean their snubbing of genre movies is finally over? In short: when will Spider-Man finally win an Oscar? (24:34)