You are viewing all posts published for the month of May, 2018. If you still can't find what you are looking for, try searching using the form at the right upper corner of the page.

How is Deadpool like a business park in Slough? They’re both postmodern. If you just wanted to find out the answer to the click-bait headline, there it is. If you want to find out more… 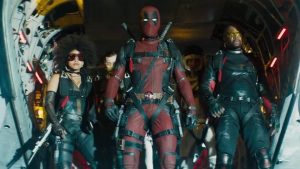 Way back in Moderate Fantasy Violence #1, Nick and Alastair covered a little film called Deadpool. And they’ve kept this up for so long that, yes, it’s time for the sequel!

But first of all – as briefly mentioned last time, their guest appearance on the And Then What? podcast is now up! Listen to Alastair talk about politics and film, Nick talk about weird crime and lovely hosts Amy & Becky dig into the drugs-and-organ-transplanting underworld. This was great fun to record and you should definitely check it out.

But back in the regular recommendations feature, Alastair’s seen Entebbe, a film that may or may not resemble Zero Dark Thirty, whereas Nick’s listening to The Weezer Bracket, a new podcast trying to find the worst Weezer song through a whole 64-item tournament bracket. There’s a lot of choice there.

And then they get into reviewing Deadpool 2 (11:04) – can it live up to the widely beloved original?

Last but not least, this week’s ultimate question – Are they any unmade sequels we’d like to actually see? (28:13) 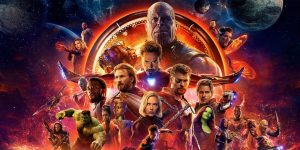 At long last, the one you’ve (okay, we’ve) (okay, Nick’s) been waiting for – Avengers: Infinity War!

But first, it’s an instructive double-bill of other recommendations: Nick’s read Why I’m No Longer Talking To White People About Race by Reni Eddo-Lodge and Alastair’s seen new Gaiman adaptation movie How To Talk To Girls At Parties.

And then, at long last, the main event – Avengers: Infinity War with full spoilers! (8:06) Can it ever live up to the sheer length of the cast list?

Not to mention our related point: How standalone must a film be to count as a real film? (28:16)