You are viewing all posts published for the month of July, 2019. If you still can't find what you are looking for, try searching using the form at the right upper corner of the page. 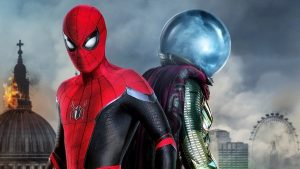 After years of heroic violence on Netflix (and coverage on this podcast), Marvel’s Defenders franchise comes to an end with the final season of Jessica Jones!

But first, Nick’s read Lies Sleeping, the latest Ben Aaronovitch urban crime fantasy novel, while Alastair’s watched the new What We Do In The Shadows show.

And then it’s time to get down on those Jessica Jones tones (8:47), with spoilers coming in pretty early, as our heroes investigate how the show bounces back from that disappointing second season and whether they can pull off a real ending.

Last of all, Nick and Alastair reflect on the whole damn six-show enterprise, which they’ve covered from the early days of the podcast, and send it off with the immortal question: WHO SHALL MOURN THE DEFENDERS? (31:08)