SPOILERS: in this post, I am going to spoil a major twist in recently-released comic The Clone Conspiracy #3. I’ll put a ‘Read More’ cut in before any plot details to protect anyone scrolling down the homepage. Aside from that… yeah, stop reading if you don’t want to know. 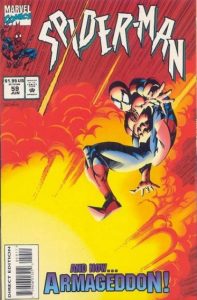 Hi everyone, Nick here. I’ve been meaning to write an article for the podcast site for a while, and anyone who knows my comics-reading history at all won’t be surprised to hear what finally jerked me into action.

You see, I started properly following US Spider-Man comics aged ten or eleven. I’d been reading the UK reprints (clunkily titled Exploits of Spider-Man) from WH Smiths for a while, before taking the plunge and starting on the proper American editions. The first US comic I ever bought is pictured to the right. It was part two of a story, which in turn was part of the years-long Clone Saga arc.

In this comic, Peter Parker is out and about as Spider-Man, but wearing a different costume because his clone Ben Reilly (who normally wears said costume as ‘the Scarlet Spider’) is in prison pretending to be him, because he’s been framed for murder by yet another clone.

Somehow, I was hooked by this. I’m amazed I even understood it. Anyway, now they’re doing a storyline called The Clone Conspiracy where various plot points from this story are being exhumed. This seemed as good a time as any to finally try and compute my feelings about… well, Ben Reilly.

Who was Ben Reilly? 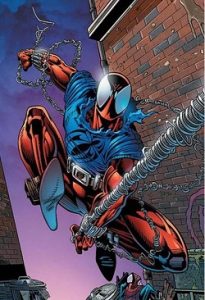 Ben’s 90s-awesome Scarlet Spider costume, which Spider-Man was using in that first ever comic I read.

As I said, Ben Reilly was the name of Spider-Man’s clone. Well, a name he assigned to himself after realising he couldn’t be Peter Parker because someone else called dibs.

He originally appeared in the 70s, where he fought Spider-Man once, before being cut short by an explosion. Next issue, one Spider-Man woke up first to find the other dead, then duly angsted for a while about how he couldn’t be sure he wasn’t the clone. The stupid bastard never really settled this, and was duly punished when said clone turned up alive and well in the 90s calling himself ‘Ben Reilly’, triggering a years-long storyline about whether the Spider-Man of the last twenty years had been the clone all along.

But I won’t attempt to summarise the Clone Saga, or even talk about the (weirdly fascinating) internal politics behind the scenes, because that’s already been done by The Life Of Reilly. That’s well worth a read if you want to see how that story played out, or just if you’re curious how the twin agendas of telling a good story and making piles of money can poison each other in the worst possible way.

Because this is the thing – the Clone Saga, to cut that long story short, did not go well. There are good ideas and good issues here and there – if you want a list of which bits are worth reading, that’s a different and longer post – but the endeavour as a whole is regarded as a low point in Spider-Man’s long and uneven history, and a major trigger for the end of the 90s comics era of gimmicky excess and hero-replaced-with-different-version-of-hero stories. 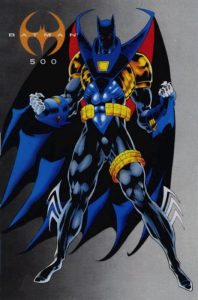 Some of the other major storylines in that trend were alright, as well. The Batman: Knightfall arc (the one which introduced Bane and inspired much of The Dark Knight Rises movie) was really good apart from its terrible ending. Death of Superman too, although they’ve yet to manage a storyline involving spike-covered Superman-killing beast Doomsday that doesn’t just feel like a pale attempt to imitate that.

The Clone Saga, though – look, I have a lot of affection for it. But it’s a weird love, entirely shot through with the knowledge that it’s not that good and I can never recommend it to anyone in good conscience. A fair chunk of it is on the Marvel Unlimited subscription service, but even just spending the time seems a bit much.

I sometimes consider starting a weekly podcast in which myself and a lucky clone-newcomer co-host (queue here!) read through the Clone Saga in 4-6 issue chunks and try to comment on it, but I suspect that sounds better in theory. Also I would need to find a co-host I wouldn’t mind losing as a friend.

The thing is, I’m not alone in this appreciation for Reilly as a character and weird nostalgia for the Clone Saga. I’ve been on Twitter and Spider-Man fan message boards, and the Bring Back Ben movement persists. There are people who admit the Clone Saga was a dragged out mess, but still have a lot of love for the character. I bought every issue of the Scarlet Spider series they did a few years back, it was fun. Even if it wasn’t my man Ben in the costume.

The issue, of course, is that Ben Reilly was incredibly likable. He was built to be loved, right from the start. Other replacement storylines (such as the afore-mentioned Knightfall and Death O’Superman) were intended to be temporary, so the entire story aimed to hammer home how the stand-in version wasn’t right for the gig.

But, at least for a fair while, the Clone Saga was meant as permanent. Ben Reilly would come back and take over as the main character of the Spider-Man comics, while now-revealed-as-clone Peter Parker wandered off with Mary Jane to have a family. It was a gluttonous act of having your cake and eating it, and of course it didn’t work.

To prep us to accept him willingly as our new Spider-King, Ben Reilly was mostly chilled. Having sat out years of painfully angsty 90s Spider-Man stories, he remained just a nice dude. When the Clone Saga began, Peter Parker himself was going through an actual nervous breakdown, running around declaring that he was “only the Spider now, the Man is dead” and grimly beating the shit out of people.

All of which, quite deliberately, just made Ben Reilly look more appealing. Whereas other super-replacement stories signalled their upcoming switchback by showing us why the replacements were too violent/vulnerable/evil/cool/whatever to keep the job, Ben was just alright. During the brief period he actually was Spider-Man, he was a genuine breath of fresh air. 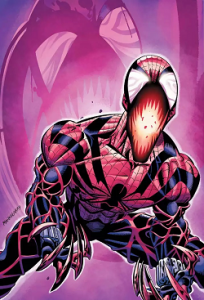 Ben possessed by Carnage during a moment of peak-90s

Although having him take over as Spidey but still call himself “Ben Reilly” was a major death knell for the whole thing. Bringing in a Spider-Man who wasn’t Peter Parker was always doomed to be reversed. But because they’d done such a good job of writing Ben as a calm guy at peace with himself, who’d accepted his new identity and found his own place in the world, they couldn’t now have him casually take over Peter’s life. Especially since, in order to leave no cake uneaten, Peter himself was still alive and using the name.

Ben Reilly, then. A man hoisted on his own petard, probably making friends with it as they levered him to the top. Too likable for his own good, too chillaxed to live. And then Marvel killed him off, because they wanted Peter Parker back and it was the quickest way to achieve that, and we were all left bereft. They made us love him and then took him from us too soon. Perhaps that’s why many Clone Saga fans, even knowing many of the comics suck, still feels this strange sense of unfinished business. Because it wasn’t meant to be this way, even though it was probably inevitable.

I mean, I was about twelve. Ben Reilly was my Spider-Man. I really thought I was getting in at the ground floor of a new era. Imagine, if you will, my tiny disappointment.

But never mind, because it seems my unfinished business is finally being answered!

They Brung Back Ben??? 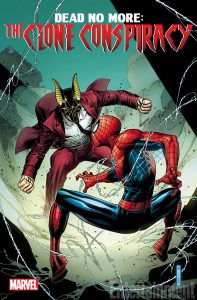 Ben now wears a suit jacket instead of a ripped hoodie.

Yes, a mere 1000+ words into this article, I’m going to talk about those Clone Conspiracy spoilers I mentioned at the top. Basically – Ben is back, and now he’s a villain. Well, he’s only come back for a few pages as the cliffhanger of an issue, so I’m reluctant to get too far into whether he’s truly evil and what it all means, as I’m sure there’s more coming.

But one question: does the inherent likability of Ben Reilly make him unsuited to being a baddie?

It certainly puts a lot of onus on writer Dan Slott to make him a villain with a valid point. But those are the best villains. I’ve enjoyed The Clone Conspiracy so far, so I’m fairly happy to see where Slott is going with it. There are quite a few characters who serve the role of ‘Hey, it’s another Spider-Person with Spider-Powers!’ in the comics right now, so if Ben Reilly is meant to be sticking around, he probably needs another angle. Maybe villainy is it. Or perhaps he’ll be rolled back to anti-hero over the course of the remaining issues.

I don’t know. I’m no longer ten, I’ve developed the inevitable cynicism of the long-time comic reader. Nothing lasts forever, it’s all about the money, etc. But I still like Ben Reilly quite a bit. Fortunately, I’m also well-adjusted enough not to start accusing Dan Slott of weeing on my childhood if I don’t like his take on the character, so that’s lucky.

So yeah, hands up if you love the Clone Saga! And by the Clone Saga, I mostly just mean Ben Reilly! But be warned, anyone who looks too enthusiastic might be forced to co-host that podcast with me.