Warning: Spoilers for Hannibal, Legion and 2001: A Space Odyssey (although that film came out in 1968 so why haven’t you seen it?)

We have all seen a film or TV show that has taken an odd turn, like a bizarre dream sequence or a really strange twist. The work of David Lynch is known for its oddness; his show Twin Peaks is a perfect example of this. Sometimes it’s more than just a strange scene or character. Sometimes the entire tone or story of a particular work is presented in a way completely counter to how we see reality.

There are lots of reasons for this. In real life, people don’t spontaneously break out into song or dance, but in a musical it’s a handy way of showing how a character thinks or feels, as well as being entertaining to watch. Satire is another example of where the reality we are shown is markedly different to ours, to make a point and to be funny. 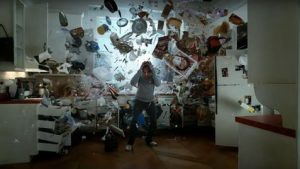 Sometimes this goes further and the films or TV shows can only be described as “abstract”. Abstract art, to borrow a phrase, is notoriously difficult to define, but we all know it when we see it.

The Tate gallery’s website defines Abstract Art as: “Art that does not attempt to represent an accurate depiction of a visual reality but instead use shapes, colours, forms and gestural marks to achieve its effect.” It’s easier to explain with examples. The work of Henri Matisse is abstract. If that went over your head, then think about the films of Nicolas Winding Refn. Still not with me? The TV show Hannibal is quite abstract. You’ve not seen Hannibal, then Legion? That’s a good show.

Looking at how abstraction (the process of being abstract) is used makes it clearer. Abstraction can be used to explain the emotions associated with a scene, instead of the specific details. Take Refn’s film The Neon Demon, the unusual visuals show the audience when protagonist Jesse (Elle Fanning) is feeling frightened, alone or powerful. Using lighting, music and shot construction in an abstract way to show how a character is feeling is clearer than relying solely on performance and is subtler than having a voice over or the character talking to camera. 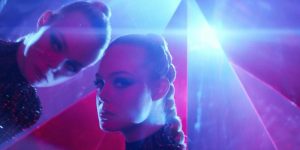 Showing what a character is feeling, instead of what is literally happening, is common in ballet. In Prokofiev’s Romeo and Juliet, following the death of Mercutio, there is a dance where the dancer playing Mercutio pulls away from Romeo, who reaches out for him. Mercutio is already dead in the plot and is not supposed to be actually doing this. The dance shows how Romeo feels about the recent death off of his friend and drives the next scene where Romeo confronts and then kills Tybalt. Abstraction is used to communicate how the character feels, so that we can understand his actions.

This is works because we think visually and film/TV (as well as ballet and painting) is a visual medium trying to convey non-visual ideas. A book can seamlessly take you inside a character’s head and tell you their thoughts, but film and TV need to work a little harder.

Abstraction also makes it possible to dramatise plot events that take place inside a character’s heads in an accessible way. These plot changes may not be related to their emotions, as in the Romeo and Juliet chase. My favourite example of this is the TV show Hannibal. Will Graham (Hugh Dancy) has a unique mental condition that allows him to understand horrific murders and the thoughts of killers. Being consistently exposed to such horror makes Graham mentally unstable and he fears that he is losing his mind, which is not helped by the manipulation of his psychiatrist, Hannibal Lecter (Mads Mikkelsen). 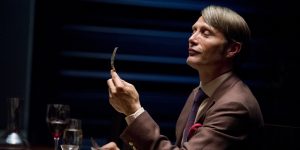 As Graham navigates a world that is so disturbing it would unhinge the most stable of individuals, his unique mental condition means that his perception of reality becomes distorted. We see this distortion reflected literally in visuals, in the set design and music used in the show. The strange things that Graham sees are not true in a literal sense, but from his perception, they are.

As an audience, we understand Graham’s mental state through the abstract visuals. The personal, or inner, conflict of Hannibal is Graham questioning his own sanity, which is shown to the audience using abstraction.

Another example is Pablo Picasso’s painting Guernica, which portraits an actual ballet of the Spanish Civil War. Battlefield photography existed since the American Civil war seventy years earlier, but it could not accurately show the intense horror that the Nazi war machine inflicted on the small Spanish town. Picasso instead shows a twisted and distorted nightmare that conveys the suffering of the people, more efficiently than showing what it would have literally looked like.

Abstraction can also be used to show the non-tangible content of a scene rather than what is physically happening. In the TV show Legion, when the story literally goes inside the head of protagonist David (Dan Stevens), we understand the complex mix of emotions, memories and mental health conditions found there.

In a book, their nature could be described without visual reference, but sight is the main sense the mediums of film and TV rely on. In the words of the Tate, this is not an accurate depiction, but it does use “shapes, colours, forms and gestural marks” to get across what it’s like in poor David’s head.

David is also sharing his mind with a malevolent, psychic being that torments him. This being, the Shadow King, has no physical form and cannot be rendered visually in a literal way that does him justice, but he can be rendered in an abstract way so that the audience can understand the effect this being has on David. As with Hannibal, David’s mental state is central to the dramatic tension of the main plot and the plot is developed with an abstract approach.

The same is true of the climax of Stanley Kubrick’s 2001: A Space Odyssey, where David Bowman (Keir Dullea) enters the alien monolith and is transported to another dimension. This process transforms Bowman physically and expands his mind. Again this is conveyed to us through abstract images and music so that we can relate to something that we cannot literally know.

So what have we learned? Abstraction is a way of showing how people are feeling or interacting with things that are not tangible. Not every show or film that has an element like this uses abstraction. Star Wars has the Force, but it is shown to us literally. I have no real understanding of what the Force is or what it is like to use it. This is not necessary for the story Star Wars is trying to tell, but if a future Star Wars director wanted the audience to understand what it was like to use the Force then abstraction is one tool that is available.

Abstraction also makes the show or film visually interesting and different from the straightforward visuals of most shows. Let’s not forget pretty pictures are nice to look at. The Neon Demon or 2001 are memorable because they are so distinct. However, the visuals do more than create mood or style, they are integral to telling the story itself.

Next time you’re watching something a little strange, ask yourself: is this what is literally happening or is something else going on?